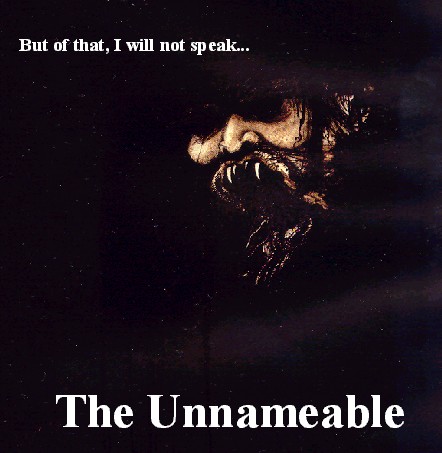 Many of Lovecraftâs adherents and admirers have also been apologists for his obvious racial bigotries. They have been quick to point out, for example, that he married a Jewish woman and had Jewish friends. They have also been quick to point out that he was guilty in nothing more than sharing what has been called "the prejudices of the times". This may be so. But it can also be argued that Lovecraft's "prejudices" have shaped his very writings.

It should be obvious, perhaps especially to the casual reader, that Lovecraft had something of a paranoid attitude towards anyone not entirely Anglo-Saxon. His writings are filled with references to race; "The Horror At Red Hook" being one of the most obvious. This remarkable story seems to read almost as an argument against immigration. Many of today's mouthpieces for such politics would warmly approve of Lovecraft's description of "the polyglot abyss of New York's underworld", his obvious contempt for "Syrian, Spanish, Italian, and Negro elements impinging upon one another" and fear for the "fragments of Scandinavian and American belts lying not far distant". Lovecraft was an Anglophile, who adored an imaginary English past with it's graceful architecture (in which he took a scholarly and keen interest), but held the world he lived in with misanthropic contempt. His longing for this past, which he also writes about in "The Dream Quest Of Unknown Kadath", in which Randolph Carter has constructed a dream kingdom for himself based on his own childhood memories of living in England; and, indeed, the fabulous city that Carter is seeking so passionately is revealed to him to be simply his own memories of his own New English home. It demonstrates a conservatism that goes beyond mild, it is a conservatism that is mirrored in the far-right's longing for a make-believe past to which to return, and is always hand-in-hand with contempt for any culture or people outside that culture.

Lovecraft's writing style is a byword among horror, fantasy and science-fiction readers, and is too easily imitated and parodied. This writing style is also an affectation of Lovecraft's personal demons. He stares in very horror at the universe, and wants to cling longingly to his childhood past. So it comes as no surprise that whenever people are mentioned (and it should also be noted how badly Lovecraft conceived his characters; all his stories seem to be little more than autobiographies of his own fevered dreams, with little room for other people apart from himself) they are caricatures, almost as imaginary as the gods, demons and monsters he invents. Returning to "The Horror At Red Hook", it is the very "mixed-blood" masses who are invoking ancient demons (this story is in fact one of his most blatantly Satanic, as many of the demons mentioned in the climax are from Christian mythos; it is also interesting in particular to read his description of "Lilith", who he describes as "a naked phosphorous tittering thing", which is far and away from the traditional descriptions of this peculiar Hebrew goddess), and who kidnap children for sacrifices, in particular from "blue-eyed Norwegians", who's "sturdy Vikings of that section" hope to form a mob to bring them back. These immigrant "others" engage in crime, particularly people smuggling, and are referred to in Lovecraft's usual forced and florid style. In fact, there is no difference between his descriptions of people and his descriptions of demons and monsters in this story. All are catalogued as props in a performance, whose main player, the "sensitive Celt" Malone, seems, as usual, hopelessly caught up in. Here is a classic Lovecraftian white male being literally swept into a multi-racial and multi-gendered hell. And all the while, Lovecraft's famous writing style makes no distinction between human and non-human.

Perhaps it goes without saying, but for that reason it should also be noted that his written universe is devoid of any women. Hardly any female character surfaces in his many stories. One could well believe that to Lovecraft, women did not exist, except perhaps as providers and caretakers in his real life. His imaginary worlds are so masculine that they exemplify, over and over, his own misogyny. He is, in his stories, the lone white man, whose view of what is around him is of the eternal other.

Lovecraft's bigotries, though, can be merely a symptom of a deeper malaise. It would be foolish to disregard them, as many of his apologists have done, since demonstrably they surface again and again in his stories (it is tempting to think that his "The Temple", told from the point of view of a German naval officer, is a gentle poke at his own prejudices, but it is just as tempting to view it as approval for the German officer classes' cold and categorical bigotry). But his actual writing style reveals more about his psyche; these are dream writings. He writes ever and always about effluvia; his descriptions of masses of people, streams of monsters, things that come up from beneath the ocean or the ground, or things that come as gasses and fluids from outer space. These are, of course, standard horror descriptions, but Lovecraft made such tools his own in a personal and psychological way. The description seems to be almost about bodily fluids, in that these are living substances that are yet foreign to Lovecraft's ideal of being "human", which was certainly frail and unreal. "The Unnameable" is a more obvious example of a thing, a living thing, that rises from the tomb to sweep up itâs narrator and his friend (who is nothing more than another template of Lovecraft himself). "The Lurking Fear" however is an even more interesting example, as it is a story of incest. In the final description of what it is that has been laying havoc to the countryside in the area of House Martense, it is in fact a collective of "dwarfed, deformed hairy devils or apes" (once again the ambiguity between the real and unreal), who are in fact the Martense family, as revealed by their distinctive eye colour, degenerated through years of inbreeding. His description of "the thing's" arrival is also revealing; "a loathsome night-spawned flood of organic corruption more devastatingly hideous than the blackest conjurations of mortal madness and morbidity. Seething, stewing, surging, bubbling like serpent's slime it rolled up and out of that yawning hole, spreading like a septic contagion and streaming from the cellar at every point of egress...".

This is classic Lovecraft, and this is the writing with which, when describing fear, he was obviously the most at ease. He is virtually spewing; his pen is vomiting. Even though what he is actually describing is a group of creatures, who are in fact human, Lovecraft has damned them to become a unified whole that has no thought and no reason, but acts only as a fluid. It is this type of writing that allowed Giorgio Maganelli to describe him as "a pornographer of horror". This is indeed pornography, in it's lurid graphic descriptions and it's constant reaching for some sort of climax that releases the narrator from strain. A huge effluviant rush of incest from the bowels of the earth could not be more "erotic", to the twisted mind. In his bigotries and confusions, Lovecraft is trying to release himself in the only way he can, by writing. He spews his contempt for humanity onto paper, and his dystopic vision of the universe as a whirlpool of suffering and horror is his way of exorcising (and consequently exercising) demons of hate and lust. He seems totally afraid and in contempt of humanity, and expresses this in his love for a quaint and totally fictitious Golden Age compared to a quaint and totally fictitious Nightmare Universe, where the majority of humanity practice black magic and turn themselves into monsters ("The Dunwich Horror" being the best and most famous example), and where he alone stands as a bewildered observer, narrator and victim. For Lovecraft, the isolationist, humanity was simply himself; Hell was other people. -Andrew McIntosh